skip to main | skip to sidebar

APPEARANCES is a Green Arts Festival happening in Provincetown, MA from April 20 - 29, 2012. Outdoor installations (including mine!) will remain until June 9. 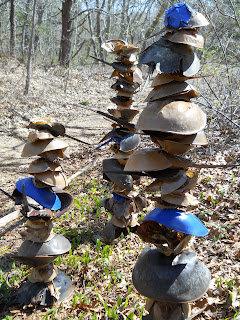 I'm thrilled to be part of the festival -- showing my Horseshoe Crab Totems. I installed them this week at Foss Woods (Location 8 on the APPEARANCES map of all outdoor installations.)
Last fall I noticed lots of horseshoe crab shells had washed up on the sand at Pleasant Bay in Orleans and I began collecting them, not really having any idea of what I'd do with them. But I love their shapes and colors. And I love that they've been on this planet for millions of years. According to Wikipedia, the earliest horseshoe crab fossils are found in strata from the late Ordovician period, roughly 450 million years ago. Another notable fact is that horseshoe crabs have blue blood -- which makes them valuable to scientists....as well as to artists! 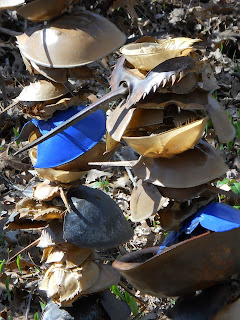 Margot E.
I'm a visual artist, working primarily in fiber creating fabric collage and art quilts. I also create mixed media, often with natural and found objects. And monoprints find their way into my work. Photography is also something I do quite often, sometimes for its own sake, sometimes as a tool for my work with cloth. I have an art studio at Western Avenue Studios in Lowell, a vibrant community of more than 150 artists. After working in public radio for about 25 years (primarily at WGBH-FM in Boston)I re-discovered my artist self. I'm still working sometimes as a narrator and voice-over talent, primarily for Descriptive Video Service (DVS) at WGBH, which produces a narration track for blind people on the major PBS shows like NOVA, American Experience, Masterpiece Theater, Nature, etc. I love being outdoors, and much of my fiber art reflects my life-time love affair with nature.